Hannah Gregg at Buzzfeed has created a beautiful map and list of state-themed cocktails for when you’re doing some cross-country driving or listening to the vote count on election night. 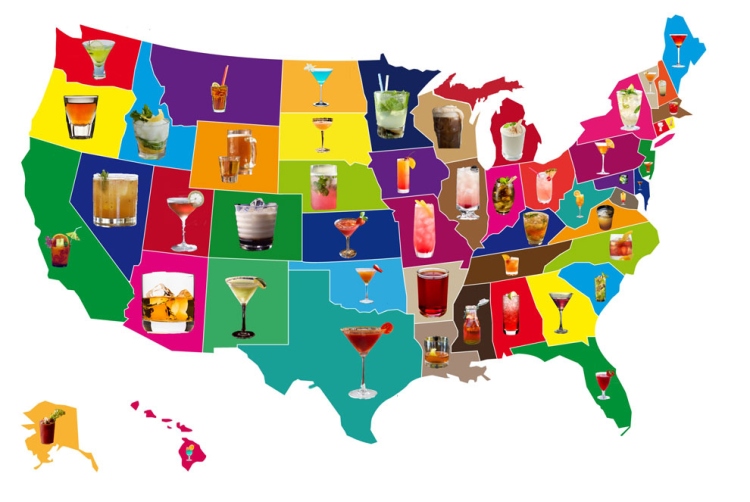 Keep in mind, these drinks are not the go-to for locals.  For example, no one in Indiana is drinking “The Refined Janet Guthrie (Sweet Tea Vodka, Refined Mixers margarita mix)” which, in honor of the Indy 500, was created to commemorate the first woman that qualified and drove in the race.  Get the recipe here.  In fact, although the Indy 500 is celebrated as a national holiday along with July 4th, no one here is celebrating the women’s history behind the Indy 500.  It would be magical, but it ain’t happen’.  Also, that cocktail’s delightful combination of Margarita mix and sweet tea vodka sounds disgusting.

Grub Street also mapped out historic prohibition-era-style cocktails for all 50 states and came up with the “North Shore Flower” for Indiana:

The key here is tracking down the specific gin, which is made in Illinois, about an hour north of Chicago: In a shaker, combine 2 ounces North Shore Gin Number 6, 1 1/4 ounce Chase elderflower liqueur, 3/4 ounce lemon juice, and 1/2 ounce gum syrup (the bar uses Wilks & Wilson). Shake with ice and strain into a chilled martini glass. Garnish with a lemon twist.

The cocktail sounds delicious but the gin is from Illinois.  Although Indiana’s northern border does make up the south shore of Lake Michigan, this geography does not represent the whole state.  And, let’s be honest, I live in Indiana and it is like pulling teeth to find a good cocktail outside of Indianapolis.  The poison of choice?  Beer.  More specifically, $3 pitchers of PBR or a proper Indiana-made beer.

Inspired by Bon Appetit’s recent Donald Trump-looking drink – The Combover – I tasked myself with creating an Indiana micro-cultural cocktail that would try to best represent the Muncie, Indiana quilt: histories of Native American land dispossession and white cultural appropriation of Indian heritage, rampant post-industrialism in the Rust Belt, corn and big ag, churches, gun culture and hunting, racism and the KKK, the nation’s hometown of meth production, Middletown and Muncie’s history as the typical American suburban city, and white people with largely German ethnic roots.  What a fun challenge.

I call it, the Funcie Munsee

I haven’t tried this so if it tastes bad, shoot and chase with more cheap beer.

Stir, sip, and repeat unless it’s on a Sunday and then you should be in church.

American Studies scholar/historian at the University of Utah, Asia Campus and blogger of my research on urban studies, food, visuality, and social justice and the connections between them. View more posts